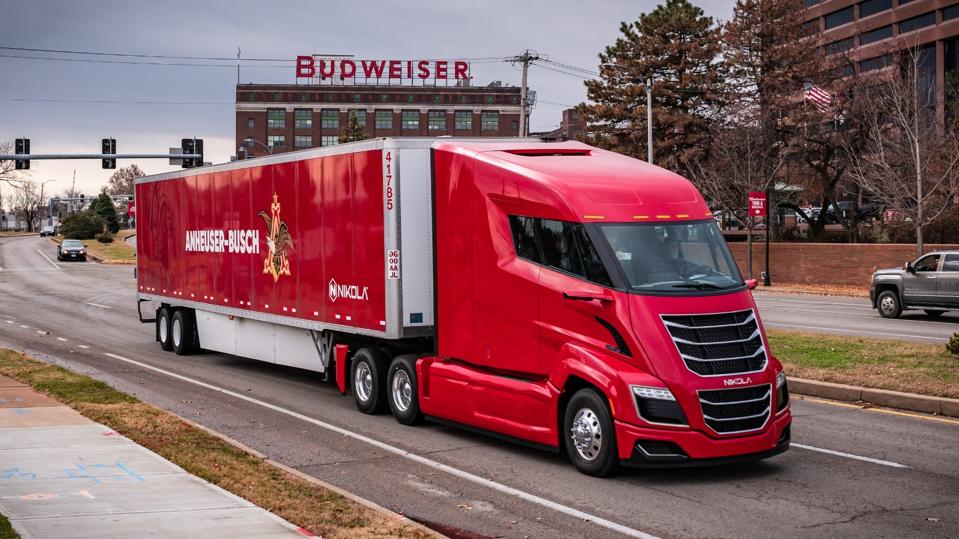 (Updates that company says it “proactively” contacted the SEC in third paragraph.)

Nikola Corp., stung by accusations of fraud and misrepresentation by an analyst with a short position in its shares, released a detailed rebuttal today refuting his report which the company says was timed to benefit the author’s bet the hydrogen truckmaker’s stock would fall. Nikola also said it contacted the Securities and Exchange Commission over the matter.

Describing itself as an “early-stage growth company,” Nikola says it’s undergone “extensive due diligence processes” by numerous industrial companies it’s partnered with, including Bosch, Hanwha Group, CNH CNHI Industrial and General Motors, and financial backers ValueAct Capital and VectolQ Acquisition Corp., the company it merged with to go public in June. The company calls the report by Hindenburg Research “false and defamatory.”

Additionally, Nikola said in a follow-on statement that its legal counsel “proactively contacted and briefed” the SEC regarding its concerns over the report on Sept. 11. “Nikola welcomes the SEC’s involvement in this matter.”

Bloomberg reported the regulator “is examining Nikola Corp. to assess the merits of a short-seller’s allegations that the electric-truck maker deceived investors about its business prospects,” citing unnamed people familiar with the matter. An SEC spokeswoman declined to confirm a review or comment on the matter to Forbes.

The Sept. 10 report, “Nikola: How to Parlay An Ocean of Lies Into a Partnership With the Largest Auto OEM in America” by Nate Anderson, a CFA whose Hindenburg Research says it specializes in forensic financial analysis, contributed to a 24% drop in Nikola shares last week. Among its accusations, the “breakthrough” battery system Nikola founder and Executive Chairman Milton said the company was working on last year doesn’t exist and the company has claimed to have designed technology and vehicle components purchased from other manufactures as its own. “We have never seen this level of deception at a public company, especially of this size,” Anderson said.

Shares of Nikola rose 11% to $35.79 in Nasdaq NDAQ trading Monday. The stock fell about 8% in after-hours trading following the Bloomberg story.

The Hindenburg report came two days after Nikola’s surprise news of a far-ranging manufacturing and technological tie-up with General Motors GM GM +2.1%. The largest U.S. automaker’s decision to partner with Milton’s ambitious but unproven startup to build its Nikola Badger electric pickups and supply batteries and fuel cells, while also taking an 11% stake, sent Nikola shares up 41% for the day. The move improved the odds Nikola, which won’t generate meaningful revenue for at least two years, can get its heavy-duty electric trucks into production (more or less) on schedule and take Elon Musk’s Tesla Semi in the race to commercialize zero-emission trucking. The GM partnership also complements Nikola’s previous alliances with companies including Bosch, Meritor, European truckmaker IVECO, Nel Hydrogen and solar panel giant Hanwha.

“Nikola is a story stock now and it’s all about execution looking ahead through 2023,” Wedbush equity analyst Daniel Ives said in a research report today. He has a Neutral rating on the shares.

“If Trevor and the team can successfully build out its Arizona factory, morph prototypes into models (both on Badger and trucking front), lay the groundwork for its charging network, and catalyze delivery trucking orders with an attractive gross margin structure then the opportunity for NKLA is massive and the stock will reflect this dynamic,” Ives said. “Clearly there is much wood to chop to get there over the next 12 to 18 months and this remains a "prove me" stock in the eyes of investors with the bears jumping on” the Hindenburg story.

Among the key points in Nikola’s response, its “breakthrough” battery claims were not solely based on its partnership with U.K.-based tech startup ZapGo that collapsed early this year. “The potential battery technology advancements are related to an ongoing confidential R&D partnership with a leading academic institution, not ZapGo. The company is excited about potential breakthroughs related to its next-generation battery technology,” Nikola said.

Nikola also disputed Hindenburg’s claims that a prototype electric Nikola One semi it unveiled in 2016 wasn’t a functional model, saying it was driveable by its own propulsion and equipped with a functional gearbox, batteries, inverters, motors, power steering, suspension and other features that were all functional. The company suspended some development work on a battery-only version of the One truck around that time when it shifted the focus to hydrogen power for long-haul trucks.

Nikola’s rebuttal emphasized that deliveries of Tre electric trucks begin in late 2021 as promised, after it also released photos of five test versions of the semis being built by partner CNH’s IVECO commercial vehicle unit in Ulm, Germany, late last week. The Hindenburg report had said that, as of July 2020, no vehicles were being produced. Bosch is working with Nikola on that project and is “aligned on the product roadmap for the Tre truck, Nikola said.

The company is also to start getting early production units of its hydrogen fuel cell-powered Nikola 2 semis to customers including Anheuser-Busch for road testing in 2021. Commercial deliveries of the trucks are to begin in 2023. Electric trash trucks being developed for Republic Services RSG are to be tested in 2022, with commercial deliveries also likely to start in 2023, Nikola said.

The Hindenburg allegations are “are false and misleading, and designed to manipulate the market to profit from a manufactured decline in Nikola’s stock price,” the company said. “Nikola is building novel and revolutionary technology from the ground up. As part of this process, and as part of the company’s evolution, growth and development, Nikola has quickly and nimbly pivoted its business model based on the industry, macro environment, technology and other factors in pursuit of the most value-enhancing path forward.”